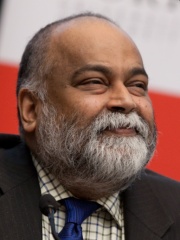 Arjun Appadurai (born 1949) is an Indian-American anthropologist recognized as a major theorist in globalization studies. In his anthropological work, he discusses the importance of the modernity of nation states and globalization.Arjun Appadurai was born in 1949 and raised in Bombay, India, and went to the United States where he obtained a Ph.D. at the University of Chicago. He was the former University of Chicago professor of anthropology and South Asian Languages and Civilizations, Humanities Dean of the University of Chicago, director of the city center and globalization at Yale University, he was a senior tutor at New College of the Global Initiative, and the Education and Human Development Studies professor at NYU Steinhardt School of Culture. Read more on Wikipedia

Since 2007, the English Wikipedia page of Arjun Appadurai has received more than 262,786 page views. His biography is available in 18 different languages on Wikipedia making him the 50th most popular anthropologist.

Among ANTHROPOLOGISTS In India