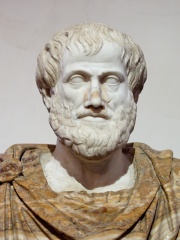 Aristotle (; Greek: Ἀριστοτέλης Aristotélēs, pronounced [aristotélɛːs]; 384–322 BC) was a Greek philosopher and polymath during the Classical period in Ancient Greece. Taught by Plato, he was the founder of the Peripatetic school of philosophy within the Lyceum and the wider Aristotelian tradition. His writings cover many subjects including physics, biology, zoology, metaphysics, logic, ethics, aesthetics, poetry, theatre, music, rhetoric, psychology, linguistics, economics, politics, meteorology, geology, and government. Read more on Wikipedia

Aristotle is most famous for his philosophy on the four causes. He believed that there were four causes for everything, and that they were material, formal, efficient, and final.

Page views of Aristotles by language

Others Deceased in 321 BC