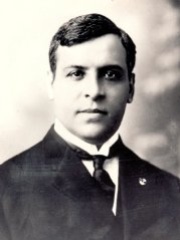 Aristides de Sousa Mendes do Amaral e Abranches (Portuguese pronunciation: [ɐɾiʃˈtiðɨʒ ðɨ ˈsowzɐ ˈmẽdɨʃ]) GCC, OL (July 19, 1885 – April 3, 1954) was a Portuguese consul during World War II. As the Portuguese consul-general in the French city of Bordeaux, he defied the orders of António de Oliveira Salazar's Estado Novo regime, issuing visas and passports to an undetermined number of refugees fleeing Nazi Germany, including Jews. For this, Sousa Mendes was punished by the Salazar regime with one year of inactivity with the right to one half of his rank's pay, being obliged subsequently to be retired. However, he ended up never being expelled from the foreign service nor forced to retire and he received a full consul salary until his death in 1954. Read more on Wikipedia

Among politicians, Aristides de Sousa Mendes ranks 4,318 out of 15,710. Before him are Pál Teleki, Salva Kiir Mayardit, Phraortes, Abbas Mirza, Vladislaus II, Duke of Bohemia, and Louis II, Duke of Bourbon. After him are Renata of Lorraine, Katō Kiyomasa, Joan I, Countess of Auvergne, Duke Wen of Jin, Ramiro I of Asturias, and Shabaka.