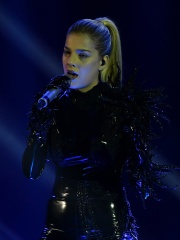 Arilena Ara (Albanian: [aɾiˈlɛna ˈaɾa]; born 18 July 1998), also known mononymously as Arilena, is an Albanian singer and television presenter. Ara rose to national recognition in Albania, upon her victory at X Factor Albania in 2013. After her participation in the 18th edition of the music contest Kënga Magjike, her song "Nëntori" found significant success in Romania and Eastern Europe, peaking at number-one in the Romanian Airplay chart. Read more on Wikipedia

Among singers, Arilena Ara ranks 2,867 out of 3,541. Before her are Shayne Ward, Russian Red, Slavko Kalezić, Marlayne, Lidia Kopania, and Logic. After her are Sondre Lerche, Kirk Franklin, Blanche, Dmitry Koldun, Keisha Buchanan, and Kaori Iida.

Among SINGERS In Albania