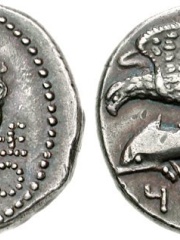 Ariarathes I (Old Iranian: Aryaraθa, Aramaic: Ariorath or Ariourat; Ancient Greek: Ἀριαράθης, romanized: Ariaráthēs; 405/4 BC – 322 BC) was the last Achaemenid Persian governor (satrap) of the province (satrapy) of Northern Cappadocia, serving from the 340s BC to 331 BC. He led defensive efforts against the Macedonian invasion, commanded by Alexander the Great, and later fought at the Battle of Gaugamela under Darius III, the last King of Kings of the Achaemenid Empire. After the fall of the Achaemenid Empire, Ariarathes continued his resistance against the Macedonians, ruling concomitantly as an Achaemenid remnant and a precursor to the Kingdom of Cappadocia. Read more on Wikipedia

Among politicians, Ariarathes I of Cappadocia ranks 11,769 out of 15,710. Before him are Boso, Margrave of Tuscany, Carlos Gomes Júnior, Norbert Lammert, Ernst Hoppenberg, José Gregorio Monagas, and Tiberius Claudius Balbilus. After him are Edmund Barton, Mikhail Myasnikovich, István Bibó, Vincas Krėvė-Mickevičius, Vladimir Krutov, and Louis Ruchonnet.