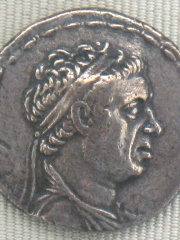 Ariarathes III (Ancient Greek: Ἀριαράθης, Ariaráthēs; reigned 262 or 255 – 220 BC), son of Ariaramnes, ruler of Cappadocia, and grandson of Ariarathes II, married Stratonice, a daughter of Antiochus II, king of Syria and wife Laodice I, and obtained a share in the government during the lifetime of his father. About 250 BC he was the first ruler of Cappadocia to proclaim himself king (basileus). It is known that he sided with Antiochus Hierax in his war against Seleucus II Callinicus. Read more on Wikipedia

Since 2007, the English Wikipedia page of Ariarathes III of Cappadocia has received more than 24,968 page views. His biography is available in 18 different languages on Wikipedia making him the 9,980th most popular politician.

Others Deceased in 220 BC