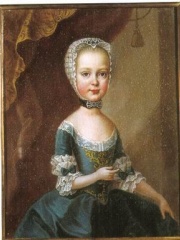 Since 2007, the English Wikipedia page of Archduchess Maria Theresa of Austria has received more than 2,195 page views. Her biography is available in 17 different languages on Wikipedia making her the 373rd most popular companion.

Page views of Archduchess Maria Theresa of Austrias by language

Among companions, Archduchess Maria Theresa of Austria ranks 377 out of 586. Before her are Eadgyth, Domitilla the Elder, Hoelun, Infanta Maria Francisca of Braganza, Tjuyu, and Elizabeth of Carinthia, Queen of Germany. After her are Prince Joachim of Prussia, Princess Ileana of Romania, Sophie, Countess of Wessex, Maria of Aragon, Queen of Castile, Margaret of Denmark, Queen of Scotland, and Catharina of Württemberg.