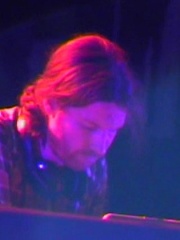 Richard David James (born 18 August 1971), better known as his alias Aphex Twin or AFX, is a British musician, composer and DJ. He is best known for his idiosyncratic work in electronic styles such as techno, ambient, and jungle. He has often been called the most influential or most important contemporary artist in electronic music, by many publications including Mixmag, The New York Times, NME, Fact Magazine, Clash and The Guardian. A number of publications made comparisons to electronic music's Mozart: Mojo called him "the Mozart of Techno", Q magazine used the "Mozart of ambient", and a 1995 cover feature in Mixmag dubbed him "a genius, the MDMA Mozart".Raised in Cornwall, James began performing as a rave DJ at free parties and clubs in the area in the late 1980s, later going on to play at venues around the West Country. Read more on Wikipedia

Among MUSICIANS In Ireland