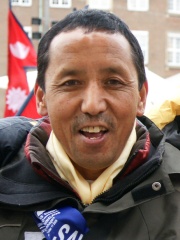 Apa (born Lhakpa Tenzing Sherpa; 20 January 1960), nicknamed "Super Sherpa", is a Nepalese Sherpa mountaineer who, until 2017, jointly with Phurba Tashi held the record for reaching the summit of Mount Everest more times than any other person. As part of The Eco Everest Expedition 2011, Apa made his 21st Mount Everest summit in May 2011 then retired after a promise to his wife to stop climbing after 21 ascents. He first summited Everest in 1990 and his last time to the summit was in 2011.Apa met Edmund Hillary many times, and was on the Expedition with his son Peter Hillary in 1990, which was the first summit for both of them. Read more on Wikipedia

Most Popular Mountaineers in Wikipedia

Among MOUNTAINEERS In Nepal