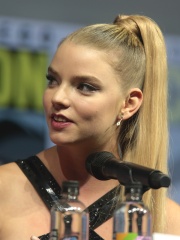 Anya Josephine Marie Taylor-Joy (born 16 April 1996) is an American-born Argentine-British actress. She first became known for making appearances on the fantasy series Atlantis (2015), and had her breakthrough with the period horror film The Witch (2015), for which she earned several accolades. Read more on Wikipedia

Since 2007, the English Wikipedia page of Anya Taylor-Joy has received more than 10,450,644 page views. Her biography is available in 25 different languages on Wikipedia making her the 6,431st most popular actor.

Boredpanda.com
Anya Taylor-Joy Of ‘The Queen’s Gambit’ Says She Isn’t “Beautiful Enough To Be In Films”
Anya Taylor-Joyâs captivating performance as chess prodigy Beth Harmon in theÂ Netflix series The Queen's Gambit has been leaving fans, critics, and first-time viewers glued to the screens. But recently, the 24-year-old beauty has revealed she has been stru…
Ilona Baliūnaitė
Livejournal.com
Anya Taylor Joy: "I don’t think I’m beautiful enough to be in films"
#QueensGambit star Anya Taylor-Joy opens up about her insecurities in new interview:“I have never and I don’t think I will ever think of myself as beautiful. I don’t think I’m beautiful enough to be in films...I just think I’m weird-looking.": https://t.co/…
shangri__la
Post Magazine
Who is Anya Taylor-Joy? The Queen’s Gambit actress’ film performances ranked, from worst to best
Anya Taylor-Joy may just be the hottest young talent in Hollywood right now.The 24-year-old is earning some of the best reviews of her career for The Queen’s Gambit, Netflix’s seven-part adaptation of the Walter Tevis novel, about a female chess prodigy in 19…
James Marsh, James Marsh
Acidcow.com
Anya Taylor-Joy Tells Her Story About Beauty (22 pics)
<!--dle_image_begin:https://cdn.acidcow.com/pics/20201125/1606336507_5uqpm4wksv.jpg|--><!--dle_image_end-->
sidhu_1