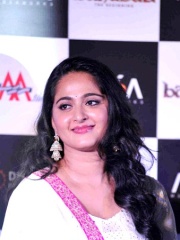 Sweety Shetty (born 7 November 1981), known by her stage name Anushka Shetty, is an Indian actress and model who predominantly works in the Telugu and Tamil film industries. She has received several accolades, including three CineMAA Awards, a Nandi Award, TN State Film Awards and three Filmfare Awards from eight nominations. Anushka, who has appeared in 47 films, is one of the highest-paid actresses in India and is popularly referred as Lady Superstar of South Indian cinema.She made her acting debut with the 2005 Telugu film Super, which garnered her a Filmfare Best Supporting Actress – Telugu nomination. The following year, she starred in S. S. Read more on Wikipedia