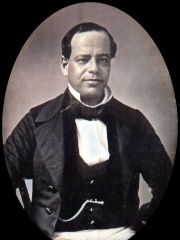 Antonio de Padua María Severino López de Santa Anna y Pérez de Lebrón (Spanish pronunciation: [anˈtonjo ˈlopez ðe ˌsant‿ˈana]; 21 February 1794 – 21 June 1876), usually known as Santa Anna or López de Santa Anna, was a Mexican politician and general. His influence on post-independence Mexican politics and government in the first half of the nineteenth century is such that historians often refer to it as the "Age of Santa Anna." He was called "the Man of Destiny" who "loomed over his time like a melodramatic colossus, the uncrowned monarch." Santa Anna's military and political career was a series of reversals. He first opposed Mexican independence from Spain, but then fought in support of it. Read more on Wikipedia

Among politicians, Antonio López de Santa Anna ranks 1,669 out of 15,710. Before him are Agesilaus II, Anchises, Jean-Claude Juncker, Toghon Temür, Otto of Greece, and Dzhokhar Dudayev. After him are Egon Krenz, Ptolemy VII Neos Philopator, Carlos I of Portugal, Abu Ayyub al-Ansari, Axel Oxenstierna, and Pleistarchus.