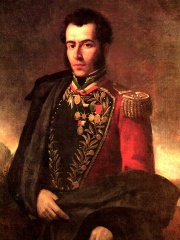 Antonio José de Sucre y Alcalá (Spanish pronunciation: [anˈtonjo xoˈse ðe ˈsukɾe j alkaˈla] (listen); 1795–1830), known as "Gran Mariscal de Ayacucho" (English: "Grand Marshal of Ayacucho"), was a Venezuelan independence leader who served as the 4th President of Peru and as the 2nd President of Bolivia. Sucre was one of Simón Bolívar's closest friends, generals and statesmen. Due to his influence on geopolitical affairs of Latin America, a number of notable localities on the continent now bear Sucre's name. Read more on Wikipedia

Among politicians, Antonio José de Sucre ranks 2,577 out of 15,710. Before him are Konstantinos Karamanlis, Gladwyn Jebb, Jacob Zuma, Antipater the Idumaean, Sverker I of Sweden, and Natalya Naryshkina. After him are Julia Maesa, Mary of Clopas, Catherine of Braganza, Pepin I of Aquitaine, George, King of Saxony, and Emperor Cheng of Han.