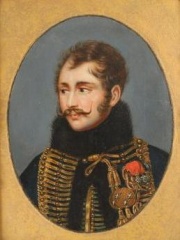 Antoine-Charles-Louis, Comte de Lasalle (10 May 1775, Metz – 6 July 1809, Wagram) was a French cavalry general during the Revolutionary and Napoleonic Wars, often called "The Hussar General". He first gained fame for his role in the Capitulation of Stettin. Over the course of his short career, he became known as a daring adventurer and was credited with many exploits. Read more on Wikipedia

Since 2007, the English Wikipedia page of Antoine Charles Louis de Lasalle has received more than 100,818 page views. His biography is available in 15 different languages on Wikipedia making him the 690th most popular military personnel.