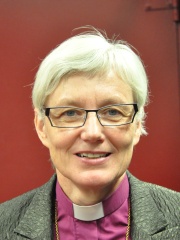 Antje Jackelén (née Zöllner; born 1955) is the Archbishop of Uppsala and primate (prima inter pares) of the Church of Sweden, the national church. On 15 October 2013, she was elected the 70th Archbishop of Uppsala and formally received through a service in Uppsala Cathedral on 15 June 2014, making her Sweden's first foreign-born archbishop since the 12th century, and the first female archbishop.Jackelén was ordained a priest in the Church of Sweden in 1980 and became Doctor of Theology at Lund University in 1999. Read more on Wikipedia

Since 2007, the English Wikipedia page of Antje Jackelén has received more than 89,003 page views. Her biography is available in 22 different languages on Wikipedia making her the 1,784th most popular religious figure.

Among RELIGIOUS FIGURES In Ukraine