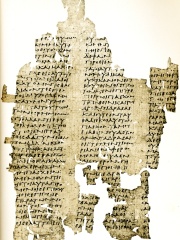 Antiphon of Rhamnus (; Greek: Ἀντιφῶν ὁ Ῥαμνούσιος; 480–411 BC) was the earliest of the ten Attic orators, and an important figure in fifth-century Athenian political and intellectual life. There is longstanding uncertainty and scholarly controversy over whether the Sophistic works of Antiphon and a treatise on the Interpretation of Dreams were also written by Antiphon the Orator, or whether they were written by a separate man known as Antiphon the Sophist. Read more on Wikipedia

Since 2007, the English Wikipedia page of Antiphon has received more than 454,692 page views. His biography is available in 27 different languages on Wikipedia. Antiphon is the 3,180th most popular politician (up from 3,463rd in 2019), the 220th most popular biography from Greece (up from 227th in 2019) and the 89th most popular Greek Politician.

The antiphon is most famous for being the song sung by the choir in response to the reading of the Gospel at Mass.

Page views of Antiphons by language

Among politicians, Antiphon ranks 3,180 out of 15,710. Before him are Lapu-Lapu, Jayavarman VII, Mark Rutte, Heshen, Archduchess Maria Maddalena of Austria, and Charles III, Prince of Monaco. After him are Archduchess Maria Anna of Austria, William IV, Duke of Bavaria, Eugenius, Ernest, Elector of Saxony, Aurelia Cotta, and Frederick II, Elector of Saxony.

Others Deceased in 411 BC