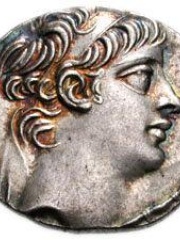 Antiochus X Eusebes Philopator (Greek: Ἀντίοχος Εὐσεβής Φιλοπάτωρ; c. 113–92 or 88 BC) was a Hellenistic Seleucid monarch who reigned as the King of Syria between 95 BC and 92 BC or 89/88 BC (224 SE (Seleucid year)). He was the son of Antiochus IX and perhaps his Egyptian wife Cleopatra IV. He lived in a period during which there was a general disintegration of Seleucid Syria characterized by civil wars, foreign interference by Ptolemaic Egypt and incursions by the Parthians. Antiochus IX was killed in 95 BC at the hands of Seleucus VI, the son of his half-brother and rival Antiochus VIII. Antiochus X then went to the city of Aradus where he declared himself king. Read more on Wikipedia

Among politicians, Antiochus X Eusebes ranks 4,434 out of 15,710. Before him are Mao Anying, Fruela II of Asturias, Vsevolod the Big Nest, Brigitte Bierlein, Hedvig Sophia of Sweden, and Maeda Toshiie. After him are Agrippa Menenius Lanatus, Abdul Rashid Dostum, Fuchai, Emperor Xiaozong of Song, Abdou Diouf, and Emperor Sutoku.

Others Deceased in 88 BC