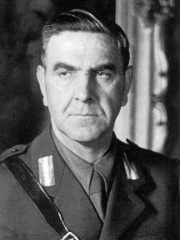 Ante Pavelić (Croatian pronunciation: [ǎːnte pǎʋelit͡ɕ] (listen); 14 July 1889 – 28 December 1959) was a Croatian lawyer, politician and dictator who founded and headed the fascist ultranationalist organization known as the Ustaše in 1929 and governed the Independent State of Croatia (Croatian: Nezavisna Država Hrvatska, NDH), a fascist puppet state built out of parts of occupied Yugoslavia by the authorities of Nazi Germany and Fascist Italy, from 1941 to 1945. Pavelić and the Ustaše persecuted many racial minorities and political opponents in the NDH during the war, including Serbs, Jews, Romani, and anti-fascists, becoming one of the key figures of the Genocide of Serbs and the Holocaust in NDH.At the start of his career, Pavelić was a lawyer and a politician of the Croatian Party of Rights in the Kingdom of Yugoslavia known for his nationalist beliefs and support for an independent Croatia. By the end of the 1920s, his political activity became more radical as he called on Croats to revolt against Yugoslavia, and schemed an Italian protectorate of Croatia separate from Yugoslavia. Read more on Wikipedia

Since 2007, the English Wikipedia page of Ante Pavelić has received more than 864,898 page views. His biography is available in 42 different languages on Wikipedia making him the 557th most popular politician.

Among politicians, Ante Pavelić ranks 553 out of 14,801. Before him are Georgi Dimitrov, Richard II of England, Christian II of Denmark, Louis VI of France, Peleus, and Louis IV, Holy Roman Emperor. After him are Sun Quan, Lycurgus of Sparta, Reza Shah, Frederick William III of Prussia, Claudius Gothicus, and Charles XV of Sweden.

Politicians Born in Bosnia and Herzegovina