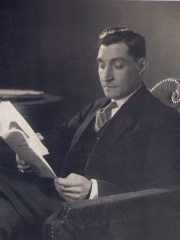 António de Oliveira Salazar (; Portuguese: [ɐ̃ˈtɔniu dɨ oliˈvɐjɾɐ sɐlɐˈzaɾ]; 28 April 1889 – 27 July 1970) was a Portuguese statesman who served as Prime Minister of Portugal from 1932 to 1968. He was responsible for the Estado Novo ("New State"), the corporatist authoritarian government that ruled Portugal until 1974. A trained economist, Salazar entered public life with the support of President Óscar Carmona after the Portuguese coup d'état of 28 May 1926, initially as finance minister and later as prime minister. Read more on Wikipedia

Since 2007, the English Wikipedia page of António de Oliveira Salazar has received more than 1,588,879 page views. His biography is available in 66 different languages on Wikipedia making him the 244th most popular politician.

Among politicians, António de Oliveira Salazar ranks 241 out of 14,801. Before him are Theodore Roosevelt, Golda Meir, Antoninus Pius, Louis XI of France, Babur, and Charles VII of France. After him are Shimon Peres, Mehmed VI, Muawiyah I, Charles IX of France, Thutmose III, and Lucius Tarquinius Superbus.