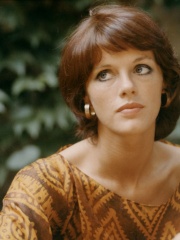 Anny Duperey (born Annie Legras; 28 June 1947) is a French actress, published photographer and best-selling author with a career spanning almost six decades as of 2021 and more than eighty cinema or television credits, around thirty theatre productions and 15 books. She is a five-time Molière Award for Best Actress nominee (known as the French Tony Awards), was awarded two 7 d'Or (equivalent to the Emmy Awards) and was nominated for the César Award for Best Supporting Actress (known as the French Oscars) for Yves Robert's Pardon Mon Affaire (1976). In 1977, she received the Prix Alice-Louis-Barthou awarded by the Académie Française. Read more on Wikipedia