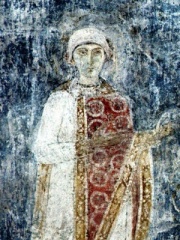 Anne of Kiev or Anna Yaroslavna (c. 1030 – 1075) was a Rus' princess who became Queen of France in 1051 upon marrying King Henry I. She ruled the kingdom as regent during the minority of their son Philip I from Henry's death in 1060 until her controversial marriage to Count Ralph IV of Valois. Anne founded the Abbey of St. Read more on Wikipedia

Anne of Kiev was the first queen of the Kingdom of France. She was the daughter of Yaroslav I the Wise, Grand Prince of Kiev and his wife, Ingegerd Olofsdotter of Sweden.

Page views of Anne of Kievs by language

Among companions, Anne of Kiev ranks 110 out of 673. Before her are Emma of Normandy, Julia Domna, Maria Theresa of Naples and Sicily, Pulcheria, Julia the Elder, and Anne Hathaway. After her are Maria Amalia of Saxony, Bianca Maria Sforza, Sawda bint Zamʿa, Frederica of Hanover, Caroline of Baden, and Anne of Bohemia and Hungary.

Among people born in 1025, Anne of Kiev ranks 1. After her are Antipope Clement III, Agnes of Poitou, Rudolf of Rheinfelden, Emperor Go-Reizei, Floris I, Count of Holland, Werner I, Count of Klettgau, John Italus, Ruben I, Prince of Armenia, and Edith of Wessex. Among people deceased in 1075, Anne of Kiev ranks 2. Before her is Yūsuf Balasaguni. After her are Al-Qa'im, Ernest, Margrave of Austria, Richeza of Poland, Queen of Hungary, Anno II, John VIII of Constantinople, Ottokar I of Styria, Edith of Wessex, and Alī ibn Ahmad al-Nasawī.

Among COMPANIONS In Ukraine