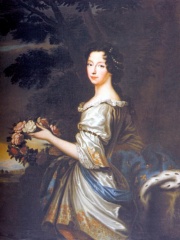 Anne Marie d'Orléans (27 August 1669 – 26 August 1728) was the first Queen consort of Sardinia by marriage to Victor Amadeus II of Savoy. She served as regent of Savoy during the absence of her spouse in 1686 and during the War of the Spanish Succession. Read more on Wikipedia

Since 2007, the English Wikipedia page of Anne Marie d'Orléans has received more than 307,714 page views. Her biography is available in 26 different languages on Wikipedia making her the 2,912th most popular politician.

Among politicians, Anne Marie d'Orléans ranks 2,894 out of 14,801. Before her are Muhammad I of Córdoba, Al-Walid II, Cleopatra Selene of Syria, Daji, Emperor Kōgen, and Agnes of France, Byzantine Empress. After her are Frederick Augustus II of Saxony, Nancy Pelosi, Joanna of Austria, Grand Duchess of Tuscany, Aspar, Eleanor of Navarre, and James Macpherson.

Among people born in 1669, Anne Marie d'Orléans ranks 3. Before her are Maria Antonia of Austria and Yevdokiya Lopukhina. After her are Louis Marchand, Wirich Philipp von Daun, Jean-Baptiste Rousseau, Davit Bek, and Prince George of Hesse-Darmstadt. Among people deceased in 1728, Anne Marie d'Orléans ranks 3. Before her are Grand Duchess Anna Petrovna of Russia and Marin Marais. After her are Christian Thomasius, Agostino Steffani, Nicodemus Tessin the Younger, Leopold, Prince of Anhalt-Köthen, Fyodor Apraksin, Frederick Louis, Duke of Schleswig-Holstein-Sonderburg-Beck, Davit Bek, Ogyū Sorai, and Cotton Mather.