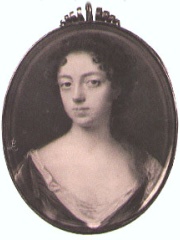 Anne Conway (also known as Viscountess Conway; née Finch; 14 December 1631 – 23 February 1679) was an English philosopher whose work, in the tradition of the Cambridge Platonists, was an influence on Gottfried Leibniz. Read more on Wikipedia

Among people born in 1631, Anne Conway ranks 8. Before her are Mary, Princess Royal and Princess of Orange, François Vatel, John Dryden, Abraham Brueghel, Pierre Beauchamp, and Al-Rashid of Morocco. After her is Magdalena Sibylla of Holstein-Gottorp. Among people deceased in 1679, Anne Conway ranks 15. Before her are Anne Geneviève de Bourbon, Margherita de' Medici, Francesco Barberini, Jean François Paul de Gondi, Abraham Mignon, and John Frederick, Duke of Brunswick-Calenberg. After her are Christian Hoffmann von Hoffmannswaldau and John Mayow.