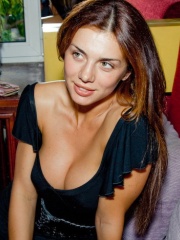 Anna Vladimirovna Sedokova (Ukrainian: А́нна Володи́мирівна Сєдоко́ва; Russian: А́нна Влади́мировна Седоко́ва, born 16 December 1982) is a Ukrainian singer, actress and television presenter. Sedokova came to prominence in 2002 as a member of pop girl group Nu Virgos, known in the CIS countries as VIA Gra and in which she was nicknamed Anya (Ukrainian; Russian: Аня). Following two years in the "golden line-up" of the group, she pursued a solo music career in 2006. Read more on Wikipedia

Among singers, Anna Sedokova ranks 2,250 out of 3,541. Before her are Patrick Ouchène, Jake Zyrus, Lee Greenwood, Mino, Ella Henderson, and Rimi Natsukawa. After her are Shahzoda, Faudel, Mark Arm, Jala Brat, Lee Soo-young, and Andrius Mamontovas.

Among SINGERS In Ukraine