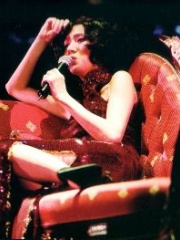 Anita Mui Yim-fong (Chinese: 梅艷芳; 10 October 1963 – 30 December 2003) was a Hong Kong singer and actress who made major contributions to the Cantopop music scene and received numerous awards and honours. She remained an idol throughout her career, and is regarded as a Cantopop diva. She was dubbed as the "daughter of Hong Kong" and is considered one of the most iconic Cantopop singers.Mui once held a sold-out concert in Hammersmith, London, England, where she was dubbed the "Madonna of the East" (東方麥當娜), which brought her to further international fame. Read more on Wikipedia

Among singers, Anita Mui ranks 510 out of 3,528. Before her are Carlos do Carmo, Séverine, Jennifer Rush, Anna Tomowa-Sintow, Natalie Cole, and Maria Farantouri. After her are Al Martino, Leyla Gencer, Lidia Ruslanova, Patti Page, Jean Ferrat, and Michel Sardou.

Among SINGERS In Hong Kong