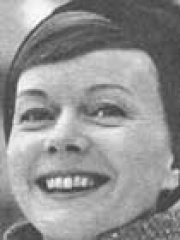 Anita Björk (25 April 1923 – 24 October 2012) was a Swedish actress.She was born in Tällberg, Dalarna and attended Dramatens elevskola (The Royal Dramatic Theatre's acting school) from 1942 to 1945. She was a leading lady of Swedish theatre for many years and worked on the national stage Dramaten from 1945 onwards and played more than 100 roles over the years (which makes her one of the greatest actors of Dramaten). Anita Björk played leading roles in film in a number of genres, including thrillers and crime mystery dramas such as Det kom en gäst (1947), Moln över Hellesta (1956), Damen i svart (1958), Mannekäng i rött (1958) and Tärningen är kastad (1960). Read more on Wikipedia

Since 2007, the English Wikipedia page of Anita Björk has received more than 37,716 page views. Her biography is available in 21 different languages on Wikipedia making her the 1,617th most popular actor.

Among actors, Anita Björk ranks 1,604 out of 8,832. Before her are Linda Harrison, Adriana Asti, Bella Darvi, David Soul, Lea Thompson, and Mary-Louise Parker. After her are Melissa McBride, Geraldine McEwan, Jeff Daniels, Massimo Troisi, Annabella, and Will Ferrell.