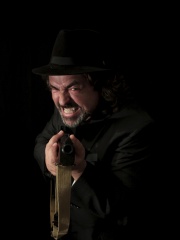 Angus Macfadyen (born 21 September 1963) is a Scottish actor. His roles include Robert the Bruce, both in Braveheart and Robert the Bruce, Vice-Counsel Dupont in Equilibrium, Jeff Denlon in the Saw franchise, Robert Rogers in the AMC historical drama Turn: Washington's Spies, McCreedy in Cameron Crowe's We Bought a Zoo, and biologist James Murray in The Lost City of Z. Read more on Wikipedia

Among actors, Angus Macfadyen ranks 4,979 out of 10,030. Before him are William Zabka, Can Yaman, Tess Harper, A Martinez, Danny Nucci, and Verna Felton. After him are Slim Pickens, Greta Gerwig, Max Riemelt, Janusz Zakrzeński, Sterling K. Brown, and Tom Arnold.