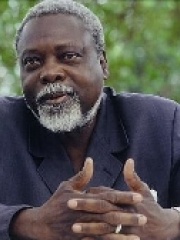 Ange-Félix Patassé (January 25, 1937 – April 5, 2011) was a Central African politician who was President of the Central African Republic from 1993 until 2003, when he was deposed by the rebel leader François Bozizé. Patassé was the first president in the CAR's history (since 1960) to be chosen in what was generally regarded as a fairly democratic election (1993) in that it was brought about by donor pressure on the André Kolingba and assisted by the United Nations Electoral Assistance Unit. He was chosen a second time in a fair election (1999) as well. Read more on Wikipedia

Since 2007, the English Wikipedia page of Ange-Félix Patassé has received more than 105,551 page views. His biography is available in 28 different languages on Wikipedia making him the 6,764th most popular politician.

Among politicians, Ange-Félix Patassé ranks 6,723 out of 14,801. Before him are Prabowo Subianto, Georg Ritter von Schönerer, Winfield Scott Hancock, Aureolus of Aragon, Blanche of Lancaster, and Joe Davis. After him are Alcetas I of Epirus, Judith of Schweinfurt, Bezprym, Aristobulus III of Judea, István Dobi, and Hanns Albin Rauter.

Others born in Central African Republic

Among POLITICIANS In Central African Republic