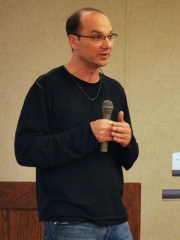 Andrew E. Rubin is an American computer programmer, entrepreneur, and venture capitalist. Rubin founded Android Inc. in 2003, which was acquired by Google in 2005; Rubin served as a Google vice president for 9 years and led Google's efforts in creating and promoting the Android operating system for mobile phones and other devices during most of his tenure. Read more on Wikipedia

Since 2007, the English Wikipedia page of Andy Rubin has received more than 1,426,313 page views. His biography is available in 26 different languages on Wikipedia (up from 25 in 2019). Andy Rubin is the 129th most popular computer scientist, the 7,543rd most popular biography from United States (up from 7,820th in 2019) and the 77th most popular Computer Scientist.