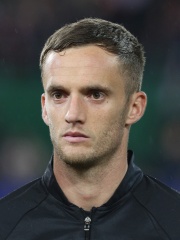 Andrew Philip King (born 29 October 1988) is a professional footballer who plays as a central midfielder for Belgian First Division A club OH Leuven and the Welsh national team. He spent the majority of his career with Leicester City, making 379 appearances across all competitions and scoring 62 goals. He won the League One, Championship and Premier League titles in 2009, 2014 and 2016 respectively, making him the first and only player to win the top three divisions with the same team in the Premier League era.Born in England, King is a Wales international, qualifying through his grandfather. Read more on Wikipedia