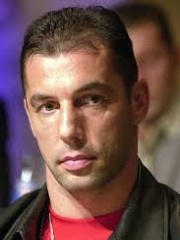 Andreas "Andy" Hug (7 September 1964 – 24 August 2000) was a Swiss karateka and kickboxer who competed in the heavyweight division. Considered to be one of the greatest heavyweight kickboxers of all time, Hug was renowned for his ability to execute numerous kicking techniques rarely seen in high-level competition and although he was usually smaller than his opponents, standing at 1.80 m (5 ft 11 in) and being barely a heavyweight, weighing around 98.0 kg (216.1 lb; 15.43 st) in his prime, he made up for his lack of size with his tremendous athleticism and speed. A southpaw, his trademark kicks included the axe kick and the "Hug Tornado", a low spinning heel kick targeting his opponents' thighs.Raised in Wohlen, Aargau, Hug was a keen footballer in his youth but gave up the sport to pursue Kyokushin karate which he began practicing at ten years old. Read more on Wikipedia

Among MARTIAL ARTS In Switzerland