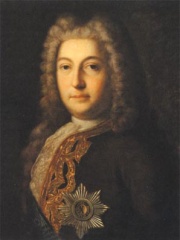 Count Andrey Ivanovich Osterman (Heinrich Johann Friedrich Ostermann; Russian: Андрей Иванович Остерман) (9 June 1686 – 31 May 1747) was a German-born Russian statesman who came to prominence under Tsar Peter I of Russia (Peter the Great, r. 1682–1725) and served until the accession of the Tsesarevna Elizabeth in 1741. He based his foreign policy on the Austrian alliance. Read more on Wikipedia

Among politicians, Andrey Osterman ranks 11,365 out of 15,577. Before him are Margaret of Bourbon, Queen of Navarre, Mordechai Gur, Tosiwo Nakayama, Amenirdis I, Edzard I, Count of East Frisia, and Gediminas Kirkilas. After him are Ignacio Comonfort, Agathe Uwilingiyimana, Valdis Dombrovskis, Christopher II, Margrave of Baden-Rodemachern, Artatama II, and Richard Huelsenbeck.