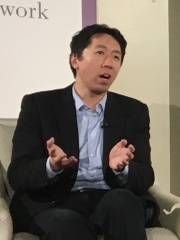 Andrew Yan-Tak Ng (Chinese: 吳恩達; born 1976) is a British-born American businessman, computer scientist, investor, and writer. He is focusing on machine learning and AI. As a businessman and investor, Ng co-founded and led Google Brain and was a former Vice President and Chief Scientist at Baidu, building the company's Artificial Intelligence Group into a team of several thousand people.Ng is an adjunct professor at Stanford University (formerly associate professor and Director of its AI Lab). Also a pioneer in online education, Ng co-founded Coursera and deeplearning.ai. Read more on Wikipedia