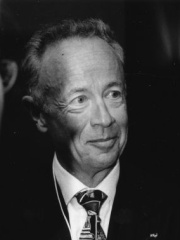 Andrew Stephen Grove (born András István Gróf; 2 September 1936 – 21 March 2016) was a Hungarian-born American businessman, engineer, author and a pioneer in the semiconductor industry. He escaped from Communist-controlled Hungary at the age of 20 and moved to the United States, where he finished his education. He was the third employee and eventual third CEO of Intel, helping transform the company into the world's largest manufacturer of semiconductors.As a result of his work at Intel, along with his books and professional articles, Grove had a considerable influence on electronics manufacturing industries worldwide. Read more on Wikipedia

Among BUSINESSPEOPLE In Hungary

Among businesspeople born in Hungary, Andrew Grove ranks 3. Before him are George Soros (1930) and Charles Simonyi (1948).