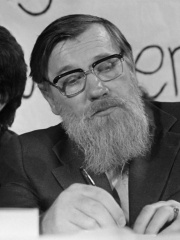 Andrei Donatovich Sinyavsky (Russian: Андре́й Дона́тович Синя́вский; 8 October 1925 – 25 February 1997) was a Russian writer and Soviet dissident known as a defendant in the Sinyavsky–Daniel trial in 1965. Sinyavsky was a literary critic for Novy Mir and wrote works critical of Soviet society under the pseudonym Abram Tertz (Абрам Терц) published in the West to avoid censorship in the Soviet Union. Sinyavsky and Yuli Daniel were convicted of Anti-Soviet agitation in a show trial, becoming the first Soviet writers convicted solely for their works and for fiction, and served six years at a Gulag camp. Read more on Wikipedia

Among writers, Andrei Sinyavsky ranks 2,333 out of 5,755. Before him are Edward Plunkett, 18th Baron of Dunsany, Terentianus, Jacob Cats, Ahmad Shamlou, Berthold Auerbach, and Alexandra Ripley. After him are Henrik Wergeland, Jalil Mammadguluzadeh, Laura Esquivel, Joseph Joffo, Zosimos of Panopolis, and James Boswell.