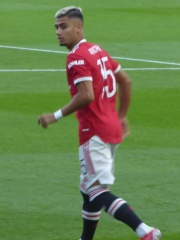 Andreas Hugo Hoelgebaum Pereira (born 1 January 1996) is a professional footballer who plays as a midfielder for Serie A club Lazio, on loan from Premier League side Manchester United, and the Brazil national team. Born in Duffel, Belgium, he began his youth career with nearby Lommel United. At the age of nine, he joined Dutch club PSV Eindhoven, before signing for Manchester United in November 2011. Read more on Wikipedia

Since 2007, the English Wikipedia page of Andreas Pereira has received more than 2,403,645 page views. His biography is available in 32 different languages on Wikipedia making him the 4,631st most popular soccer player.