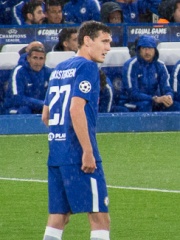 Andreas Bødtker Christensen (pronounced [ˈkʰʁestn̩sn̩]; born 10 April 1996) is a Danish professional footballer who plays as a centre back for Premier League club Chelsea and the Denmark national team. Christensen began his career at Brøndby and joined Chelsea at the age of 15 in February 2012, making his professional debut in October 2014. From 2015 to 2017 he was loaned to Bundesliga club Borussia Mönchengladbach, where he made 82 appearances and scored 7 goals. Read more on Wikipedia

Since 2007, the English Wikipedia page of Andreas Christensen has received more than 1,384,065 page views. His biography is available in 40 different languages on Wikipedia making him the 4,734th most popular soccer player.