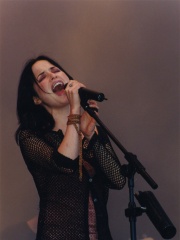 Andrea Jane Corr MBE (born 17 May 1974) is an Irish singer, songwriter, musician, author and actress. Corr debuted in 1990 as the lead singer of the Celtic folk rock and pop rock group The Corrs along with her three elder siblings Caroline, Sharon and Jim. Aside from singing lead vocals, Corr plays the tin whistle, the ukulele and the piano.With the others, Corr has released six studio albums, two compilation albums, one remix album and two live albums. Read more on Wikipedia

Since 2007, the English Wikipedia page of Andrea Corr has received more than 1,500,110 page views. Her biography is available in 29 different languages on Wikipedia making her the 1,505th most popular singer.