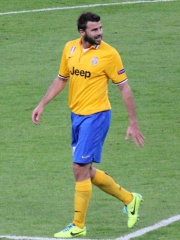 Andrea Barzagli (Italian pronunciation: [anˈdrɛːa barˈtsaʎʎi, -ˈdza-]; born 8 May 1981) is an Italian former professional footballer who played as a centre-back. A four-time member of the Serie A Team of the Year, Barzagli is regarded as one of the best and most consistent defenders in Italian football.After playing for several smaller Italian clubs in the lower divisions of Italian football in his early career, he made his Serie A debut with Chievo in 2003, and eventually came to prominence while playing for Palermo. In 2008, he was signed by German side VfL Wolfsburg, where he remained for two and a half seasons, winning a Bundesliga title in 2009. Read more on Wikipedia