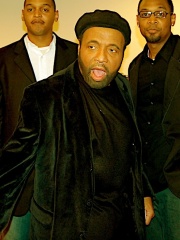 Andraé Edward Crouch (July 1, 1942 – January 8, 2015) was an American gospel singer, songwriter, arranger, record producer and pastor. Referred to as "the father of modern gospel music" by contemporary Christian and gospel music professionals, Crouch was known for his compositions "The Blood Will Never Lose Its Power", "My Tribute (To God Be the Glory)" and "Soon and Very Soon". He collaborated on some of his recordings with artists, such as Stevie Wonder, El DeBarge, Philip Bailey, Chaka Khan, Sheila E. and vocal group Take 6, and many recording artists covered his material, including, Bob Dylan, Barbara Mandrell, Paul Simon, Elvis Presley and Little Richard. Read more on Wikipedia

Since 2007, the English Wikipedia page of Andraé Crouch has received more than 585,018 page views. His biography is available in 18 different languages on Wikipedia making him the 1,814th most popular musician.