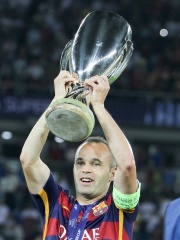 Andrés Iniesta Luján (Spanish pronunciation: [anˈdɾes iˈnjesta luˈxan]; born 11 May 1984) is a Spanish professional footballer who plays as a midfielder and is the captain of J1 League club Vissel Kobe. Considered one of the greatest players of all time, Iniesta spent most of his career at Barcelona, where he served as the captain for three seasons. Iniesta came through La Masia, the Barcelona youth academy, after an early migration from his birthplace, and impressed from an early age. Read more on Wikipedia

Andrés Iniesta is most famous for his goal in the 2010 World Cup final against the Netherlands.