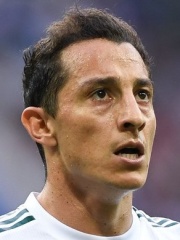 José Andrés Guardado Hernández (Spanish pronunciation: [anˈdɾez ɣwaɾˈðaðo]; born 28 September 1986) is a Mexican professional footballer who plays for Spanish club Real Betis and captains the Mexico national team. Mainly a midfielder, he can also operate as a left winger or left back. Popularly known as Principito (Spanish for Little Prince), he came through the youth ranks at Atlas, then signed with Spain's Deportivo, where he spent five seasons. Read more on Wikipedia

Since 2007, the English Wikipedia page of Andrés Guardado has received more than 1,187,975 page views. His biography is available in 45 different languages on Wikipedia making him the 3,353rd most popular soccer player.