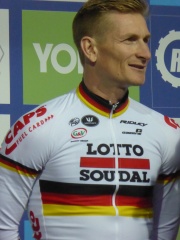 André Greipel (born 16 July 1982) is a German professional road bicycle racer, who currently rides for UCI WorldTeam Israel Start-Up Nation.Born in Rostock, East Germany, Greipel is a pure sprinter who is among the most prolific cyclists of his era (in terms of number of wins). His major successes include 22 stage victories at Grand Tours: 11 at the Tour de France, 4 at the Vuelta a España, and 7 at the Giro d'Italia. Greipel also won the points classification in the 2009 Vuelta a España. Read more on Wikipedia

Since 2007, the English Wikipedia page of André Greipel has received more than 304,939 page views. His biography is available in 29 different languages on Wikipedia making him the 165th most popular cyclist.

Among CYCLISTS In Germany