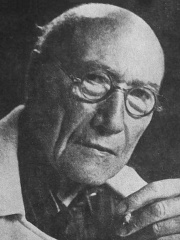 André Paul Guillaume Gide (French: [ɑ̃dʁe pɔl ɡijom ʒid]; 22 November 1869 – 19 February 1951) was a French author and winner of the Nobel Prize in Literature (in 1947). Gide's career ranged from its beginnings in the symbolist movement, to the advent of anticolonialism between the two World Wars. The author of more than fifty books, at the time of his death his obituary in The New York Times described him as "France's greatest contemporary man of letters" and "judged the greatest French writer of this century by the literary cognoscenti."Known for his fiction as well as his autobiographical works, Gide exposes to public view the conflict and eventual reconciliation of the two sides of his personality (characterized by a Protestant austerity and a transgressive sexual adventurousness, respectively), which a strict and moralistic education had helped set at odds. Read more on Wikipedia

Since 2007, the English Wikipedia page of André Gide has received more than 763,286 page views. His biography is available in 88 different languages on Wikipedia making him the 102nd most popular writer.