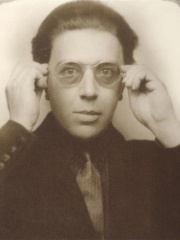 André Robert Breton (French: [ɑ̃dʁe ʁɔbɛʁ bʁətɔ̃]; 19 February 1896 – 28 September 1966) was a French writer and poet. He is known best as the co-founder, leader, and principal theorist of surrealism. His writings include the first Surrealist Manifesto (Manifeste du surréalisme) of 1924, in which he defined surrealism as "pure psychic automatism".Along with his role as leader of the surrealist movement he is the author of celebrated books such as Nadja and L'Amour fou. Read more on Wikipedia

André Breton was a French writer, art critic, and founding member of the surrealist movement. He is most famous for writing the Surrealist Manifesto in 1924.

Among writers, André Breton ranks 153 out of 5,755. Before him are Pindar, Elias Canetti, Ivo Andrić, Eugène Ionesco, Heinrich Böll, and Joseph Conrad. After him are Dr. Seuss, William Faulkner, Pliny the Younger, Jean Racine, Hafez, and Fernando Pessoa.