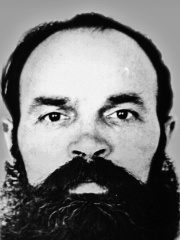 Anatoly Tikhonovich Marchenko (Russian: Анато́лий Ти́хонович Ма́рченко, 23 January 1938 – 8 December 1986) was a Soviet dissident, author, and human rights campaigner, who became one of the first two recipients (along with Nelson Mandela) of the Sakharov Prize for Freedom of Thought of the European Parliament when it was awarded to him posthumously in 1988. Marchenko, originally an apolitical oil driller from a poor background, turned to writing and politics as a result of several episodes of incarceration starting in 1958, during which he began to associate with other dissidents. Marchenko gained international fame in 1969 through his book, My Testimony, an autobiographical account written after his arrival in Moscow in 1966 about his then-recent sentences in Soviet labour camps and prisons. Read more on Wikipedia

Among SOCIAL ACTIVISTS In Russia