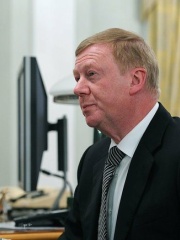 Anatoly Borisovich Chubais (Russian: Анато́лий Бори́сович Чуба́йс; born 16 June 1955) is a Russian politician and businessman who was responsible for privatization in Russia as an influential member of Boris Yeltsin's administration in the early 1990s. During this period, he was a key figure in introducing market economy and the principles of private ownership to Russia after the fall of the Soviet Union. From 1998 to 2008, he headed the state-owned electrical power monopoly RAO UES. A 2004 survey conducted by PricewaterhouseCoopers and the Financial Times named him the world's 54th most respected business leader. Read more on Wikipedia

Since 2007, the English Wikipedia page of Anatoly Chubais has received more than 218,675 page views. His biography is available in 27 different languages on Wikipedia making him the 11,303rd most popular politician.

Among politicians, Anatoly Chubais ranks 11,238 out of 14,801. Before him are Hussa of Bernicia, Diogo Freitas do Amaral, Sewadjkare Hori, Kigeli V of Rwanda, Gunnar Thoroddsen, and Juan Crisóstomo Falcón. After him are Lawrence Lambe, Włodzimierz Cimoszewicz, Vjekoslav Bevanda, Alfredo Cristiani, Edgar Lungu, and Sames I.