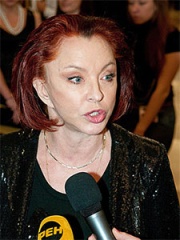 Anastasiya Alexandrovna Vertinskaya (Russian: Анастаси́я Алекса́ндровна Верти́нская, born 19 December 1944, Moscow, Soviet Union), is a Soviet and Russian actress, who came to prominence in the early 1960s with her acclaimed performances in Scarlet Sails, Amphibian Man and Grigori Kozintsev's Hamlet.In the 1990s, disillusioned with the state of cinema at home, she went abroad to teach and spent 12 years in France, England, the United States and Switzerland. In 1988 Vertinskaya was designated a People's Artist of Russia. Read more on Wikipedia

Since 2007, the English Wikipedia page of Anastasiya Vertinskaya has received more than 97,602 page views. Her biography is available in 15 different languages on Wikipedia making her the 3,166th most popular actor.