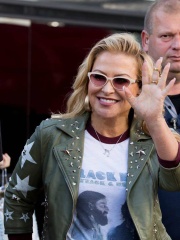 Anastacia Lyn Newkirk ( AN-ə-STAY-zhə; born September 17, 1968) is an American singer-songwriter, producer and former dancer. Her first two albums Not That Kind (2000) and Freak of Nature (2001) were released in quick succession to major success. Spurred on by the multi-platinum, global smash "I'm Outta Love", Anastacia was awarded as the 'World's Best-Selling New Female Pop Artist' in 2001. Read more on Wikipedia

Page views of Anastacias by language

Among singers, Anastacia ranks 282 out of 3,541. Before her are DJ Khaled, Kanye West, Christina Aguilera, Rod Evans, Selena Gomez, and Corry Brokken. After her are Beyoncé, Selena, Dusty Springfield, Asmahan, Renata Scotto, and Vicente Fernández.