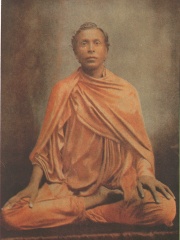 Anagārika Dharmapāla (Pali: Anagārika, [ɐˈnɐɡaːɽɪkɐ]; Sinhalese: Anagarika, lit., Sinhala: අනගාරික ධර්මපාල; 17 September 1864 – 29 April 1933) was a Sri Lankan Buddhist revivalist and a writer. Anagarika Dharmapāla is noted because he was: the first global Buddhist missionary one of the founding contributors of non-violent Sinhalese Buddhist nationalism a leading figure in the Sri Lankan independence movement against British rule a pioneer in the revival of Buddhism in India after it had been virtually extinct for several centuries the first Buddhist in modern times to preach the Dhamma in three continents: Asia, North America, and Europe.Along with Henry Steel Olcott and Helena Blavatsky, the creators of the Theosophical Society, he was a major reformer and revivalist of Sinhala Buddhism and an important figure in its western transmission. He also inspired a mass movement of South Indian Dalits including Tamils to embrace Buddhism, half a century before B. R. Ambedkar. Read more on Wikipedia

Among writers, Anagarika Dharmapala ranks 2,273 out of 5,794. Before him are Imad ad-Din al-Isfahani, Hallgrímur Pétursson, Kakinomoto no Hitomaro, Noor Inayat Khan, Phylarchus, and Franz Overbeck. After him are Edgar Lee Masters, Ueda Akinari, Ammonius of Alexandria, Frigyes Karinthy, Ki no Tsurayuki, and Harlan Coben.

Among WRITERS In Sri Lanka

Among writers born in Sri Lanka, Anagarika Dharmapala ranks 2. Before him are Aryadeva (200). After him are Michael Ondaatje (1943).